Franklinville History is its Future. Franklinville has been a manufacturing community since its earliest beginnings in the 1760s. The mechanical power of Deep River as it flows through Town triggered the construction of numerous mills and still turns electric generators today. The first cotton factory was started in 1838, triggering the growth of a village where mill workers and their families could live, play, shop and worship. 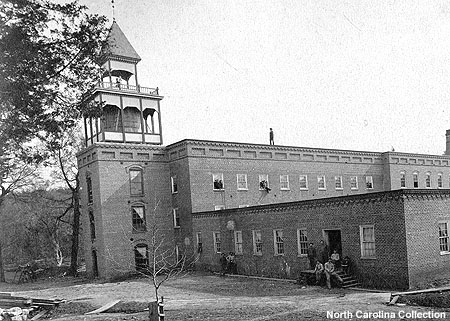 Franklinville’s history dates back to at least the 18th Century when there were Keyauwee and Saponi Native American tribes living along the Sapong River, known now as Deep River. Members of these tribes and settlers crossed Deep River at the well-known Island Ford Crossing.

In 1784, the Earl of Granville granted the land where Franklinville is now located to Jacob Skeen. Christian Morris bought this land in 1801 and built his water-powered grist mill on the river. By 1820, Jesse Franklin was the governor of North Carolina and when Elisha Coffin acquired the land and properties from Christian Morris, the area was named Franklinsville in honor of the governor. The Franklinville Library was one of the few in North Carolina in 1924. During this year, industrialist John W. Clark along with other community members, contributed books to start a public library. This project continued to grow during many hard circumstances throughout the years and thrive. The library was started in a small room in the Community House. It was moved several times before opening at its present location on Main Street. The Franklinville Library was renamed after the death of its founder in 1969, to the John W. Clark Public Library in memoriam of the man who started the first public library in Randolph County. One of Franklinville’s greatest outdoor attractions is the Deep River Rail Trail. Located along the banks of the Deep River, the rail-trail lies in the abandoned Atlantic and Yadkin rail bed between Cedar Falls and Ramseur. The trail provides a way for people living in the area and visitors to enjoy walking and biking. The natural surroundings are educational and beautiful. This area is also designated as a state paddle trail. To access the trail from Highway 64, take Highway 22 North to Rising Sun Way. Parking is located on the right. Follow the sign that directs visitors down to the trail. The Town of Franklinville invites you to visit our great rail-trail and enjoy a bit of exercise in beautiful surroundings.