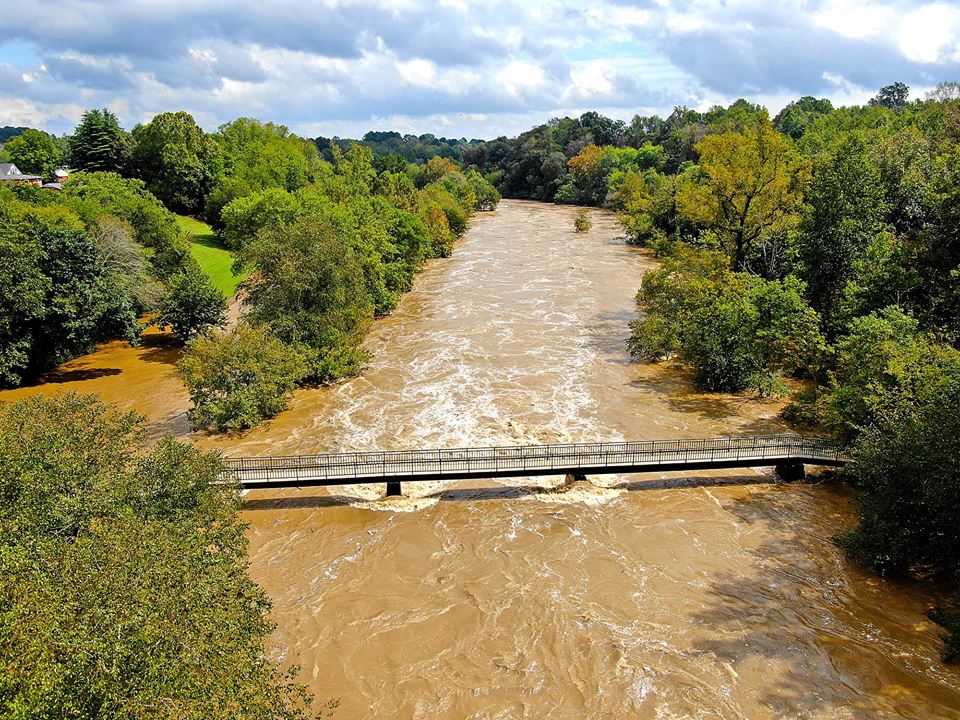 From the 1770s to the present, Franklinville has been putting Deep River to work, with water-powered mills, steam generators, and now a hydroelectric installation which sends electricity to the Duke Energy grid. But man’s harness on the energy of the flowing water is put to the test when storms, hurricanes and floods send more water downstream than usual.

Over the weekend of September 14-17, 2018, Hurricane Florence put about six inches of water into rain gauges in Franklinville, where the average annual rainfall is 46.6 inches. While it lasted, the blocked roads and flooded parks along Deep River attracted hundreds of spectators, looking out at scenes not seen in more than 50 years.

The Florence floodwaters peaked in Franklinville about noon on Monday September 18th, with an estimated 26,000 cubic feet of water per second flowing over the Upper Dam and down the river- about 11.5 million gallons a minute. This was the third-largest flood since 1901- after Hurricane Hazel in 1954, and an unnamed storm in September 1945 which may have seen twice that much flood water.

The community had water at or near the 500 year flood level- much of the Riverside Park was under water, but our 160 year-old mill buildings and 140 year-old railroad trail bed were “high and dry.” Being just 30 miles from the source of the river, we were fortunate: as high as the waters rose, the flood actually came and went in less than 24 hours. By Tuesday the cleanup was underway in Randolph County, but the same hurricane waters wouldn’t find their way back to the Atlantic for at least a week.